Mgahinga National Park is one of Uganda`s most rewarding tourism destinations despite being the country`s smallest National Park at an area of 33.7 km2. Mgahinga National Park was established in 1991 in the western part of Uganda in Bufumbira Kisoro district, 14km south of Kisoro town and 519km form the country`s capital Kampala.  Mgahinga national park features three of the mountains that form the famous Virunga massif and these include Mount Sabinyo, Mount Gahinga and Mount Muhabura respectively.

Mgahinga National Park is Uganda’s second refugium for the globally endangered mountain gorillas, with Nyakagezi as the only habituated mount gorilla family that is available for tracking by visitors on a Uganda gorilla safari. The park does not only boast for housing mountain gorillas but also the large number of the rare golden monkeys that are only found in the Virunga massif on the global scale.

The initial dwellers of Mgahinga National park were the Batwa also know as pygmies who inhabited the forest especially the Garama cave within the park which was a congregator area for the Batwa during the festive season and the cave was also believed to be the palace for their king. However, after the park had been established, the pygmies were evicted from the area in order to conserve the forest part and its attractions. Currently the Batwa dwell around the environs of the forest. They are also one of the most rewarding local communities in the whole of Africa that every person who appreciates culture should visit.

How to get to Mgahinga National park

Mgahinga National Park can be connected to from Kampala by a road distance of 519km (11hours drive).

From Kigali-Rwanda’s capital, Mgahinga is only 144km (5hours drive) and from Buhoma, the famous region of Bwindi national park, Mgahinga is located 204km away which is about 7hours drive, however from Rushaga region which also in Bwindi Impenetrable national park, the distance is just 53km to reach Mgahinga. 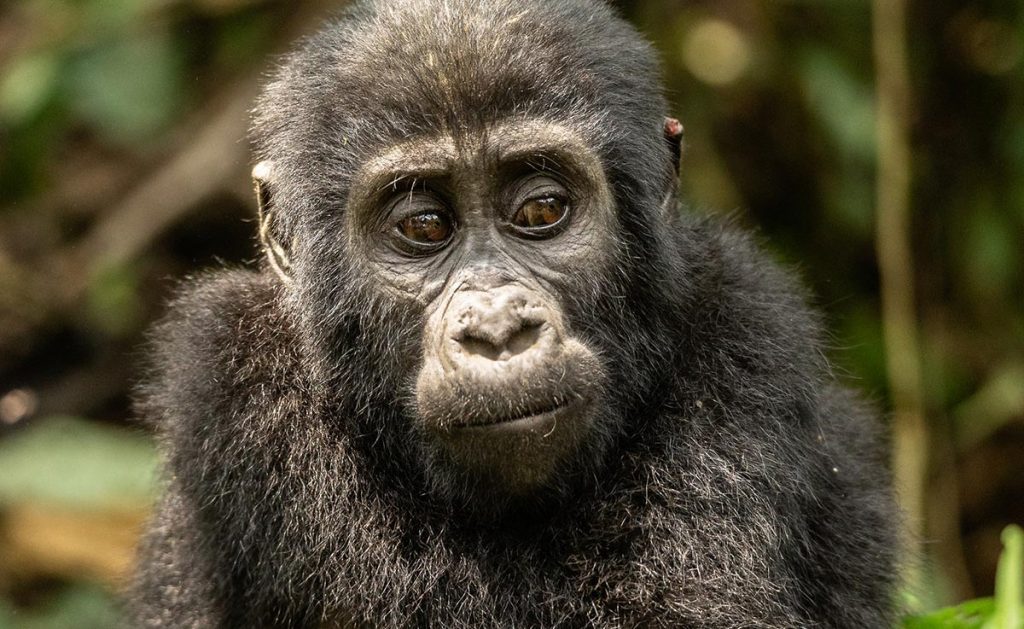 Mgahinga National Park is one of the only two national parks in Uganda where the critically endangered mountain gorillas can be found. the rich undergrowth of Mgahinga National Park which characterize of volcanic highlands and slopes that are fertile enough to support the existence of mountain gorillas-one of the top most attractions to be encountered on a Uganda safari.

This is the only habituated gorilla family in Mgahinga national park that is available to visitors to track. It has 10 members headed by one silverback who sometimes leads his group members to the Democratic republic of Congo which is at the neighborhood. Tracking these mountain gorillas in the volcanic highlands of the Virungas is really an impressing experience on a Uganda safari. 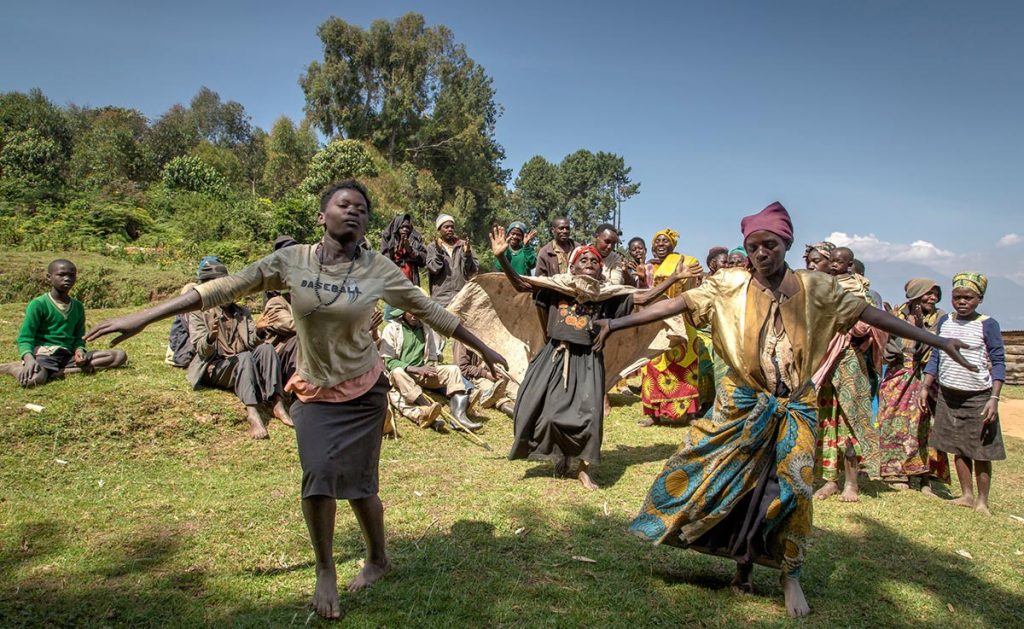 The park is surrounded by the Bafumbira and the Batwa people in Kisoro district. The Batwa are the original people who lived in the forest and survived by hunting small game and gathering food in the forest while the Bafumbira are farmers who practice crop growing. These two tribes are rich in tradition and practices that rise visitor experience on a Uganda safari. For example, the story of the Batwa, how they lived in the forest and how they still believe they are attached to this forest national park.

The 3 peaks of Muhabura (4127m), Sabyinyo (3669m) and Gahinga (3474m) volcanic mountains that make up Mgahinga National Park offer an impressive scenery of the park, the Virunga massif and the sights of the Rwenzori mountain ranges from a distance.

Mgahinga National Park is not only a home for mountain gorillas but also other wildlife that can give a remarkable experience to safari visitors in Uganda. Some animals in the park include; buffaloes, forest elephants, side-stripped jackals, golden monkeys, bush pigs, golden cats, giant forest hogs, giant forest hog. This wildlife is however rarely seen. 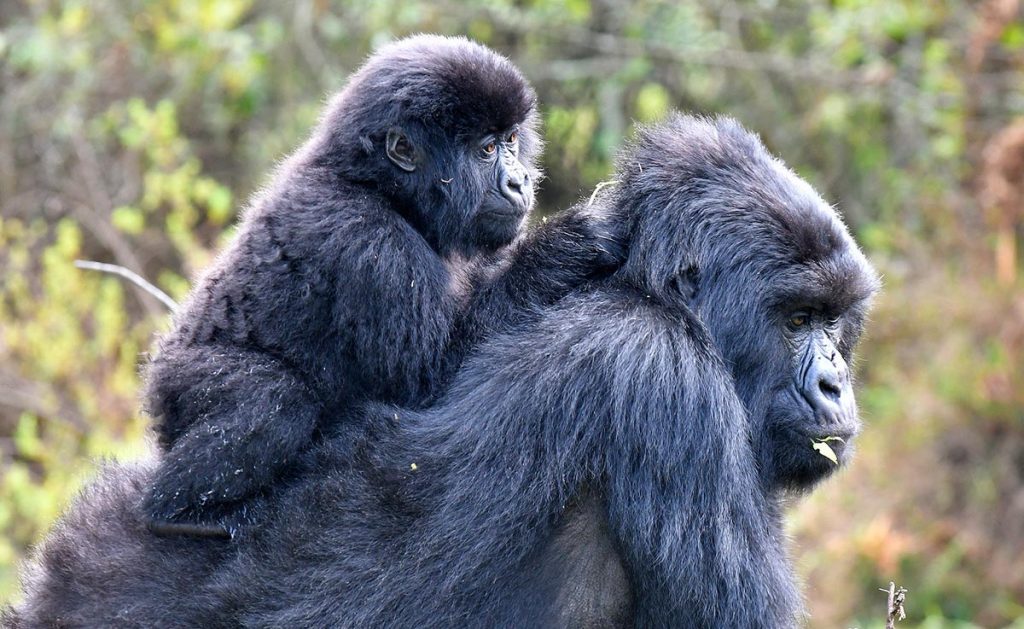 Mgahinga National Park is one of the ideal destinations available for gorilla tracking in Uganda. Mgahinga features Nyakagezi gorilla family-a habituated gorilla family available for tracking. Depending on the direction of the mountain gorillas, the trekking encounter can begin from Muhabura or Ntebeko areas. The duration of gorilla trekking in Mgahinga is unpredictable but lasts between 2-8hours starting at 8am with a briefing from the park headquarters.

Offers gorilla trekking encounter to Uganda gorilla safari undertakers. The Nyakagyezi gorilla family is habituated for tracking. The gorilla trekking encounter commences at Ntebeko area or the Muhabura section depending on the direction of Mountain gorillas. Like in Bwindi Impenetrable National Park, gorilla trekking duration is unpredictable but ranges between 2 – 8 hours commencing at 8am local time with short briefing from the park rangers or the warden. It involves hiking the volcanic slopes and traversing the jungle which makes interesting and beyond only gorillas. 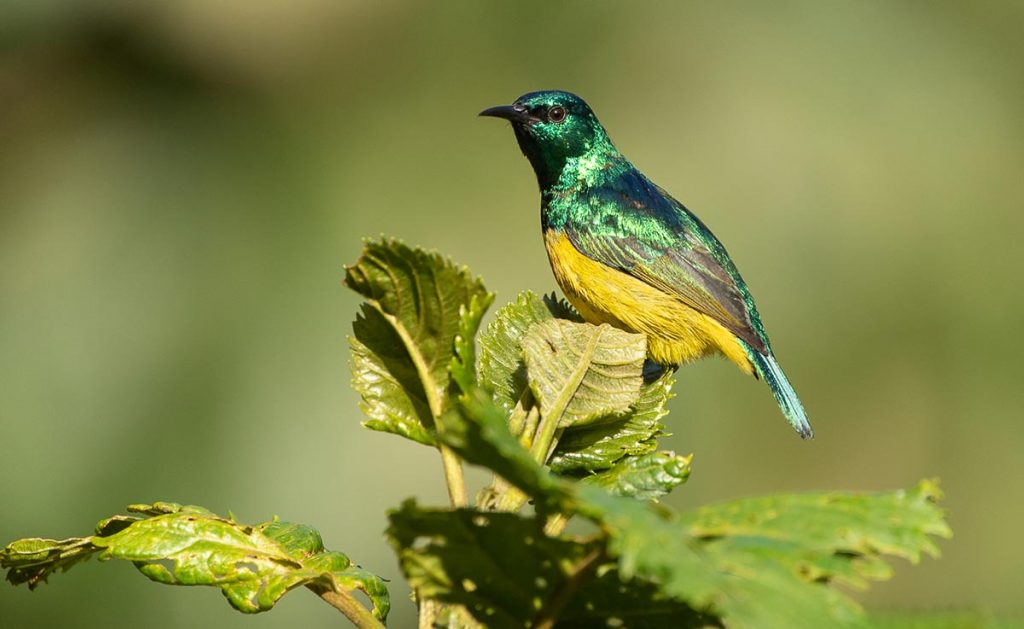 Mgahinga is one of Uganda`s safari destinations that are ideal for birding safari encounters especially between Gahinga and Sabinyo along the gorge trail. Expect to encounter birds like Bronze sunbird, Regal sunbird, Dusky turtle dove, Cape Robin-chat and Rwenzori Turaco among others. The birding activity takes between 3-4 hours. The trails bordering the park allow chances of spotting bird species like speckled mouse bird and fire finch among others. 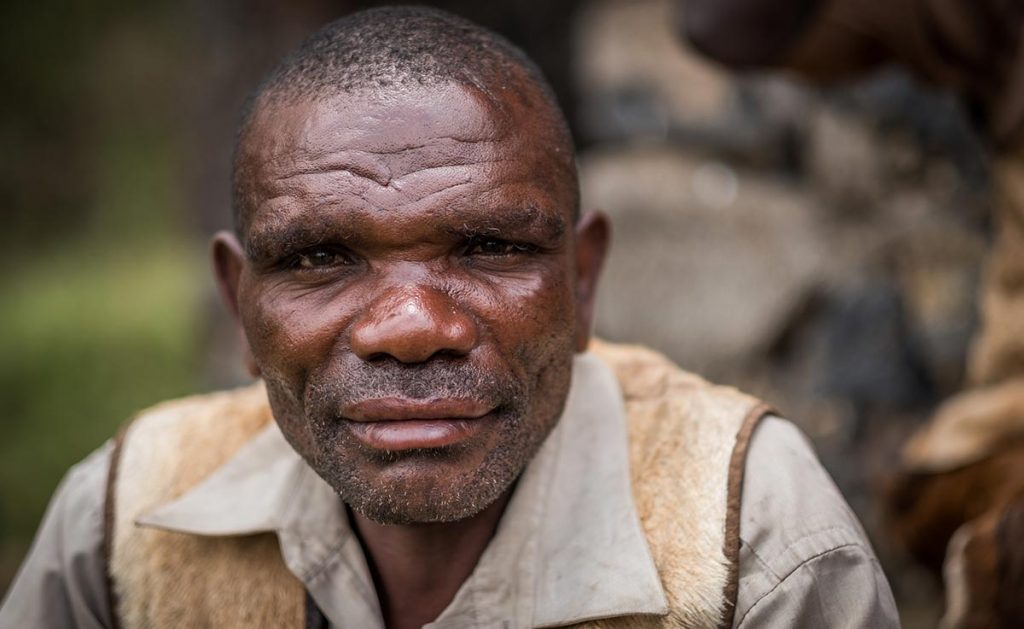 Initially, Mgahinga national park was a native home for the Batwa where they used to thrive for million years until recently in 1991 when the park was gazzeted. The eviction of the Batwa from the park did not mean they have lost it all, they are still park of they park, some of them work as tourist guides in the park. The Batwa are available to take you through the trails as you search for some attractions in the park and they will feed you with their rich tradition as well. The local people in the area undertake visitors through a series of their day today activities and the way in which they survive for example wild honey harvesting, edible wild fruits and roots, architectural modes and also their King’s palace at Garama cave. The Batwa trail encounter takes between 2-3hours only. 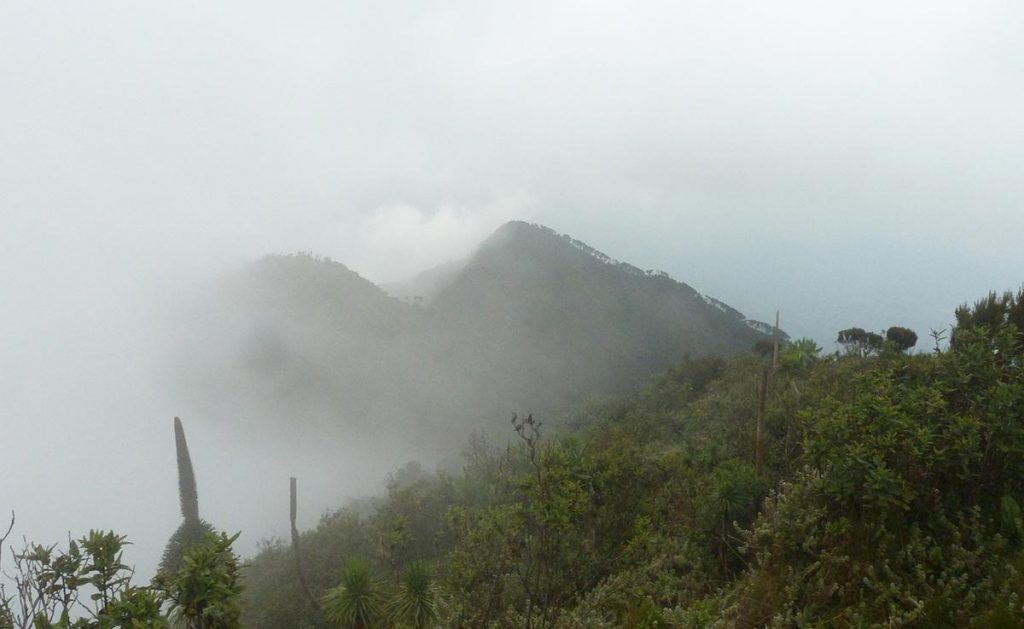 On a Uganda safari especially in Mgahinga National Park, it is hard to avoid climbing because of the 3 volcanoes which almost finish the entire area of the park. At least every mountain takes between 6-eight hours to reach its summit. Mt Muhavura allows remarkable scenery of Bwindi National Park and the Rwenzori mountain ranges while at its peak.

Mgahinga National Park best rewards when it is explored on foot where visitors have higher chances to encounter more nature for example counts of bird species like the Rwenzori turaco. Nature walk lasts for about for hours as visitors traverse the Rugezi swamp where you expect many birds among other attractions. 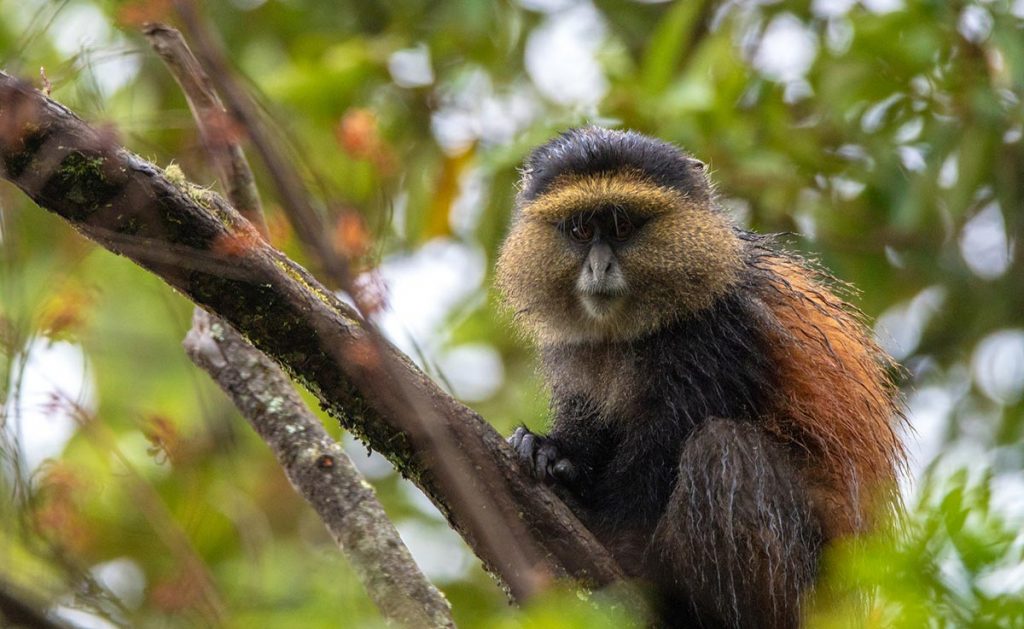 There are a good number of safari lodges and camps where travelers can comfortably stay while on a safari to Mgahinga National Park in Uganda and some of these include; Amajambere Iwacu Camp, Volcanoes Mount Gahinga Safari Lodge, Kisoro Traveler’s, Countryside guesthouse Kisoro among other accommodation facilities.